28 September 2021, Ahead of the upcoming UEFA Nations League Finals 2021, taking place between 6-10 October (CET), in Italy, leading consumer electronics and home appliances company, Hisense, has announced that it will be an official partner of the Tournament for a second time.

The 2021 edition of the UEFA Nations League Finals will be held in Milan and Turin, bringing together UEFA EURO 2020 Champions, Italy, alongside Belgium, France and Spain as the four qualified teams.

Heading into the UEFA Nations League Finals 2021, Hisense, who partnered with the inaugural competition in 2019, will continue to showcase and educate consumers about its hero products, while enabling fans to get closer to the action through bespoke content and promotions across its social platforms, including the continuation of its successful “Upgrade Your Home” campaign from UEFA EURO 2020. 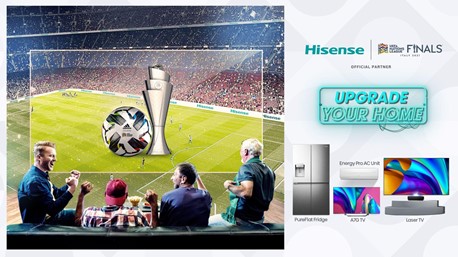 With the world’s best players involved during the UEFA Nations League Finals 2021, Hisense will present its Hisense Skill of the Day throughout the tournament, encouraging fans to comment on which players they think will light up the Finals with their skills. Hisense will also have exclusive rights to Hisense Player of the Finals, with a branded trophy being presented to the tournament’s top player, selected by UEFA.

Candy Pang, GM of Hisense’s International Marketing Department, said, “We are delighted to build upon a successful year of European football by continuing our involvement in the UEFA Nations League Finals, which will help us to further grow our brand awareness across Europe. We’re particularly excited to have the exclusive rights to the Hisense Player of the Finals and we look forward to the Finals bringing the same excitement to fans that we’ve seen over the past few years of European football.”

The UEFA Nations League Finals 2021 will enable Hisense to continue its growth throughout Europe, ensuring that its products are front of mind amongst football fans. To support this, Hisense will promote a paid media campaign across the key markets of Italy, Spain and France, promoting relevant assets detailing key products such as:

Hisense continues to support major sporting properties around the globe, including the2022 FIFA World Cup partnership, UEFA EURO 2020, UEFA Nations League Finals, Formula One Red Bull racing and Australia Open work. The sponsorship celebrates Hisense’s presence on the world stage, with the products exported to over 160 countries and regions.

‘Hisense’ Continues to Strengthen Foothold in Thailand with This Year Revenue Expected at THB3.1 Billion as Sports Marketing Strategy Leveraged by Spo …